by Aaron Nilsen
in Cover, Sports
0

The Toronto Raptors shocked the NBA during the summer by winning the Kawhi Leonard sweepstakes. This unprecedented trade lifts the Raptors among the eastern front-runners for betting on NBA Finals in 2019. Sportsbooks list Toronto as the fifth most likely to win, according to research from CanadaSportsBetting.ca.

Despite the controversy over firing Dwane Casey and trading long-time favorite DeMar DeRozan, the Raptors immediate future has never looked brighter. Toronto basketball will be more exciting to watch than ever this season, with the potential of the franchise’s first appearance at the NBA Finals.

Formula 1 Race 2022: Host Cities, Teams and Everything You Need to Know

The most popular sports in Canada

For Toronto, the irony of LeBron James moving to the west coast lies in the wholesale changes made in response to King James’ dominion over the Raptors.

Coach of the year Dwane Casey was first to be dismissed, replaced by assistant Nick Nurse. Responsible for taking charge of the offense, Nurse helped Casey implement a strategic switch that involved a greater volume of passing and three-point attempts. Casey would be immediately snapped up by the Detroit Pistons.

After promising that DeRozan would remain a Raptor when the 2018-19 campaign started, GM Masai Ujiri traded DeMar, Jakub Poeltl and a first-round pick to the San Antonio Spurs for Kawhi Leonard and vet Danny Green.

The addition of Kawhi and Green to an already stacked lineup lifts Toronto back into the championship mix after last season’s horrible playoff disappointment. LeBron no longer reigns over the east, but Toronto still needs to prove that they can win during the post season.

Toronto’s first meeting against the Celtics on October 19th resulted in a decisive 113-101 victory for the Raptors, with Leonard posting a 31-point, 10-rebound effort. Early returns suggest that Ujiri’s risk may pay off.

With all due respect to DeMar DeRozan, one of the greatest Raptors in franchise lore, the 2018-19 version of Toronto basketball might be the greatest lineup in team history – on paper.
At his best, Kawhi Leonard is a top-three player in the association, dominant on both ends of the court. Leonard bullies smaller men in the post, hits threes at a above average rate and creates shots for himself and his teammates. Kawhi’s an outstanding rebounder and possesses the size, speed and strength to guard all five positions. Put simply, he does everything at an elite level.

The excitement of Vinsanity will never be matched, but Vince Carter’s peak athleticism has nothing on Leonard’s terminator-like efficiency, intellect and tenacity. This is the first time the franchise employs an MVP-winner and defensive player of the year in his prime. As such, the ceiling for the Raptors rises significantly.

Snagging Danny Green from the Spurs will prove to be a key addition to the Raptors lineup. Green’s also an NBA champ, earning a ring alongside Kawhi Leonard. Danny’s one of the better perimeter defenders in the NBA and a master of the chase-down block. A stone-cold shooter, Green hits the three-pointer at a .396 rate over his career.

Should Green and Leonard mesh well with Lowry, Ibaka and the rest of the Raptors lineup, Toronto could win 60 or more games this year, setting a new franchise record. Perhaps more important, Leonard and Green may impart their championship experience, leading Toronto to an NBA finals appearance.

Colloquially known as “The Bench Mob”, the Toronto Raptors bench suddenly emerged as one of the best reserve units in the NBA last season. Consisting of a rag-tag group of late first and second round picks, along with undrafted talent, Toronto’s young bench embraced the unselfish offensive strategy implemented by Nurse under Casey.

Fred VanVleet emerged as the leader of the mob, an undrafted prospect who played four years at Wichita State. Fred was a D-League Champion in 2017, eventually emerging as a top sixth man around the new year. Over the last half of the season, VanVleet averaged 11.7 PPG, 3.7 APG and a steal per game in only 23 minutes per match, hitting 46.8% of his three pointers. His shoulder injury before the playoffs helped to contribute to another early playoff exit for the Raptors. 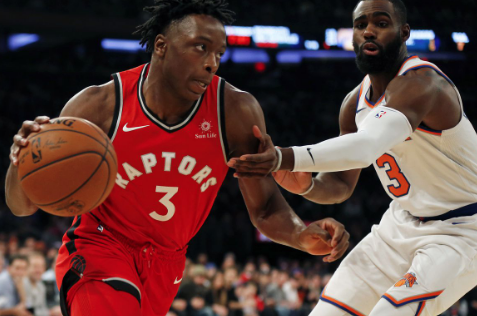 Under Ujiri, the scouting department successfully identified several diamonds in the rough. Drafted 23rd, OG Anunoby quickly cemented his spot in the starting lineup and acquitted himself well during the 2018 playoffs, earning praise from Kevin Durant as a rookie to watch. Pascal Siakam was selected 27th after a couple of years in New Mexico State, rapidly developing his elite athleticism and tireless motor as an ideal stretch four with a sky-high ceiling.

Without these young, emerging stars, Leonard, Lowry and other vital veterans wouldn’t have the support needed to maintain momentum when Toronto’s starters need a rest.

Toronto supercharged their offense with modern small ball principles: keep the rock moving, pass up a good shot for a better shot, and attempt lots of threes and layups. Moving away from iso-ball last season lifted the Raptors offense to the fourth best in terms of points per game production, and second best in terms of offensive rating, which measures overall efficiency.

The Raptors defense has been a top-ten unit over the last few years under defensive guru Dwane Casey, but they didn’t have the personnel needed to truly smother the opposition while chasing them off the three-point line.
Swapping DeMar DeRozan and Jakub Poeltl for a two-time defensive player of the year and Danny Green represents a massive upgrade on defense. Kawhi’s the only perimeter player to win the award twice, uniquely adapting the Raptors to the dominant play style of the association.

Boston will remain the favorite to emerge from the east, with the Toronto Raptors the only real competitor to challenge for an eastern crown in a weak conference. Golden State look like locks to win the west and their third consecutive ring, but the Celtics and the Raptors both feature the depth, star power and defense needed to theoretically upset the Warriors juggernaut.

Formula 1 Race 2022: Host Cities, Teams and Everything You Need to Know

The most popular sports in Canada

World Athletics Championships 2023: Everything You Need To Know

When is the release date for FIFA 23?

The Current State of the British Film Industry