by Mayday
in Cover, Music
0 Frank Ocean’s “2017 Blonded World Tour” was billed to be one of the biggest shows of the year. With massive screens, a customized catwalk and Academy Award-winning director Spike Jonze shadowing his every step, the 8 stop tour was nothing short of spectacular.

However, prior to Blonded, Frank opted for an austere look when it came to his performances, here’s how he returned with a blueprint to change that once and for all. Fresh off his two Grammy wins in 2013, Frank embarked on his “You’re Not Dead” summer tour covering Europe, Canada and Australia for a total of 16 shows. The tour would debut four new tracks “Siegfried”, “Ivy”, “California” and “Loving You” along with a tropical interlude. The first two tracks titled “Brave” and “It’s All Good” at the time ended up on Blonde three years later. Frank’s year finished off at the “Odd Future Carnival” where he headlined and performed classics tracks like “Pyramids” and “She” with Tyler, The Creator. Draped in a ocean blue scarf, Frank had his band tucked behind a large LED screen which displayed simple visuals such as palm trees and coloured backgrounds. 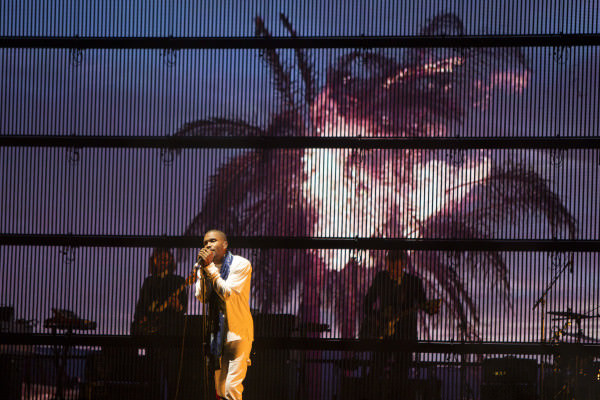 Frank’s interview on the red carpet would mark his last official on video interview until a leaked interview about the making of Blonde was accidentally left public by the editor on Vimeo.

In July, Frank took the stage at Bonnaroo, alone, sporting a soft pink hoodie and coming to a scene that mimicked an 80′s prom night. With littered balloons on the ground and a turntable sitting behind him, Frank ran through fan favourite tracks like “Lost” and “Thinkin Bout You”, often times letting the crowd take over, “y’all sound like a f***ing choir!” he yelled out. Throughout the show, Frank used tracks he was featured on in the previous years such as “New Slaves” and “Superpower” as interludes. As customary as it was during the 2013/14 run, he closed the show with the emotionally sitrring “Wiseman” before thanking the fans and walking out. 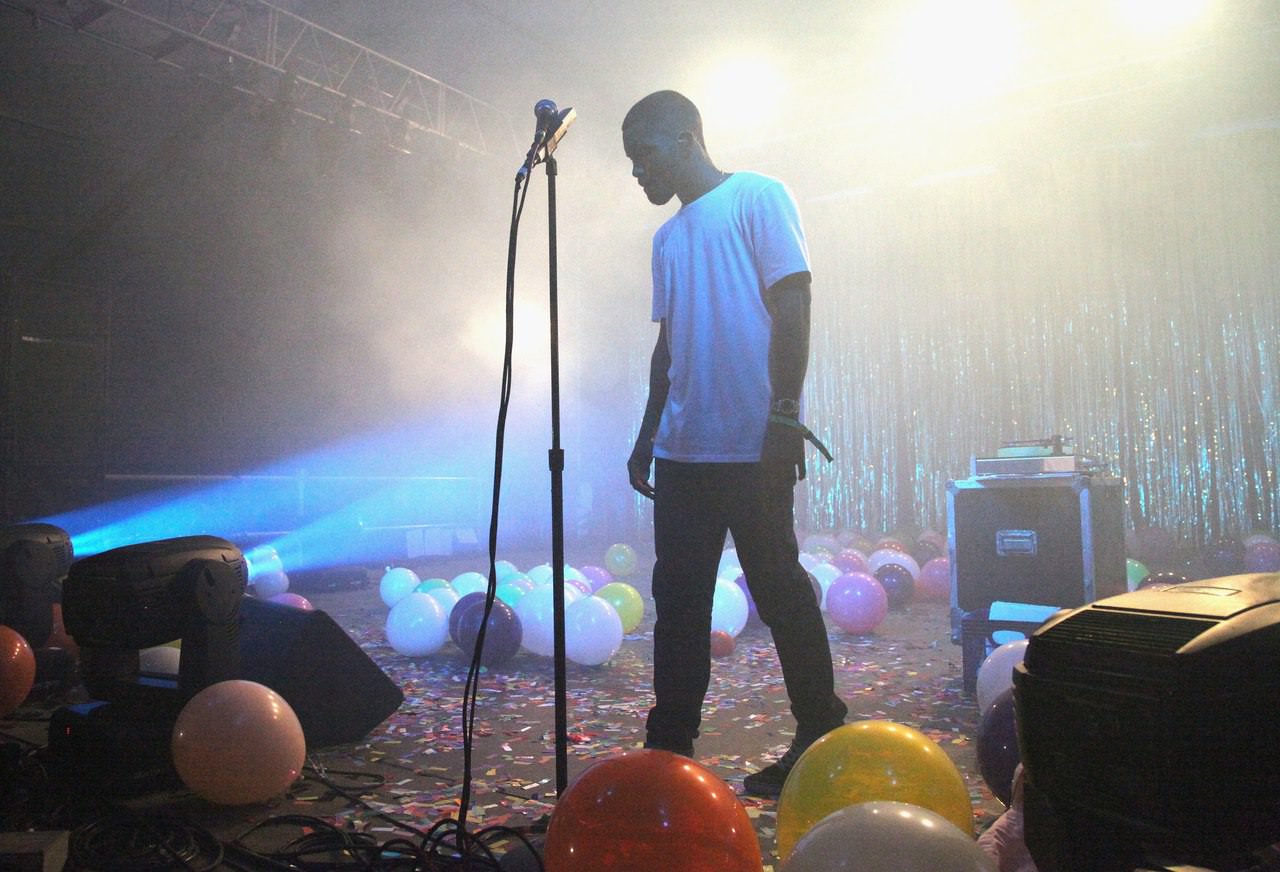 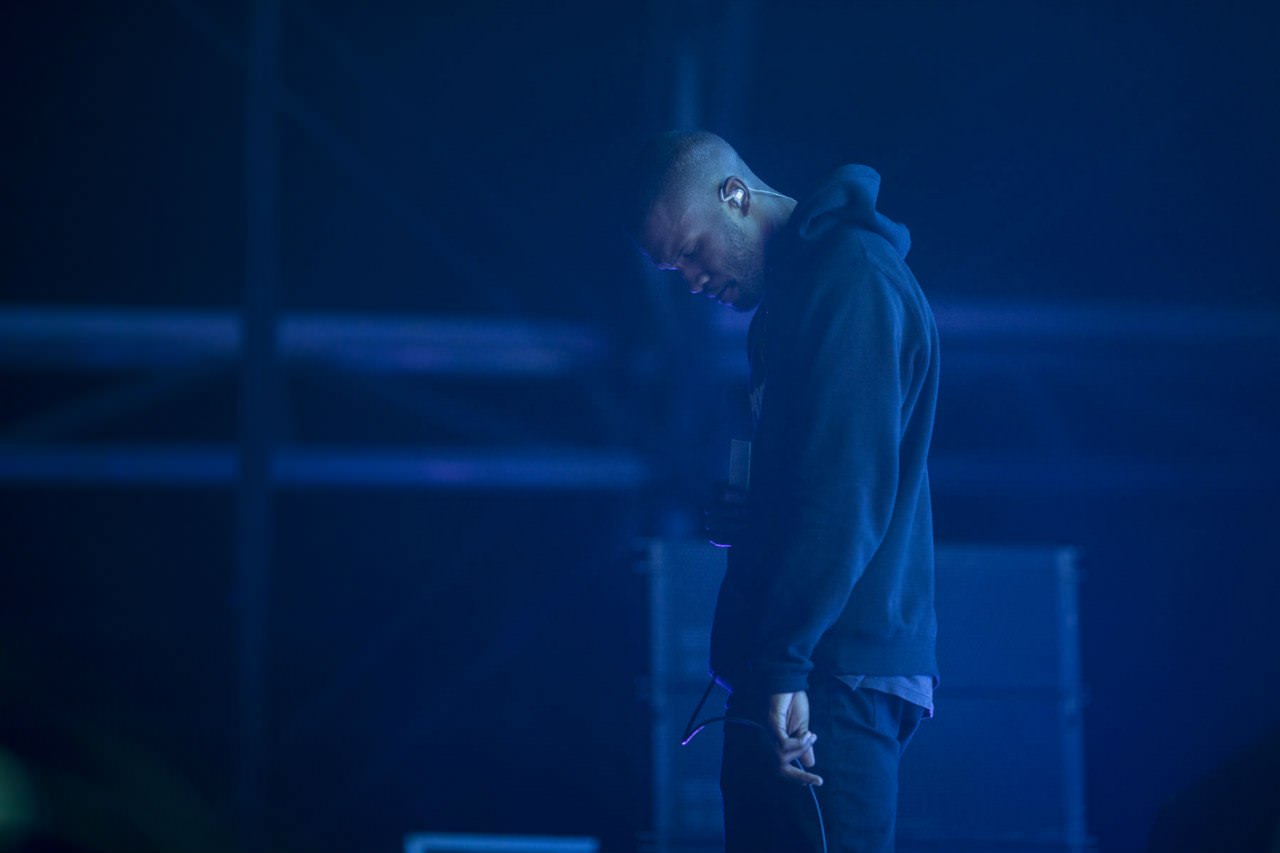 Outkast was originally intended to close the festival but due to a scheduling mix up, it was up to the 26 year old to follow a legendary performance with one of his own. Pemberton would mark the last time Frank Ocean took the stage until his return in June of 2017.

Up until that point in his career, Pemberton was the most monumental performance in Frank’s career regarding visuals. The massive screens of the festival allowed Francisco Soriano’s visuals to soar in full effect. Each track had it’s own feel, during certain tracks, a psyhedelic filter was applied to Frank’s gold wrapped E30 which resulted in a gorgeous output. 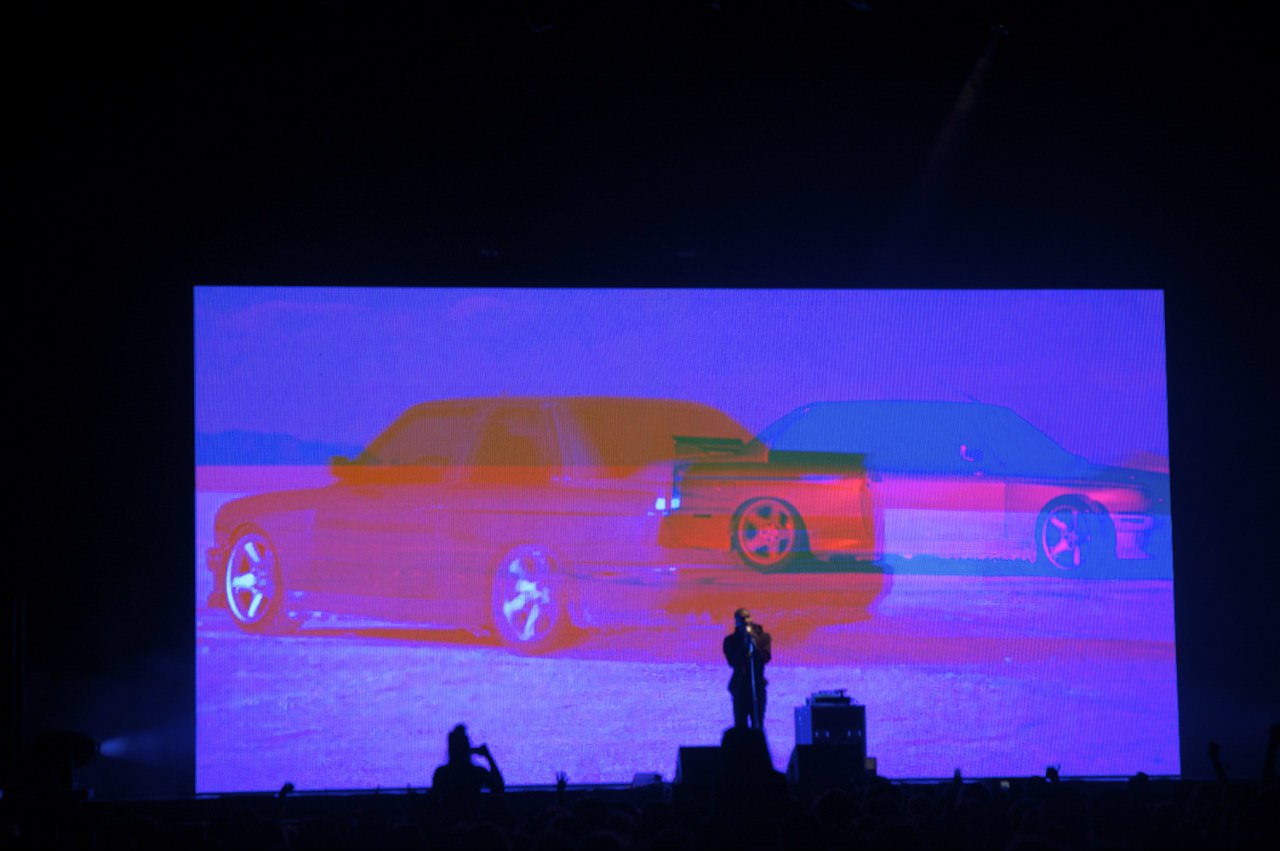 Pemberton was the final “channel ORANGE” show and served as a catalyst to enhance Frank’s visuals in the future. The show debuted new unreleased visuals and effects yet remained true to Frank’s previous shows, minimal.
Unlike the lush and exuberant projects, Frank was performing, the visuals and presentation of his performances were kept minimal as he opted to display burning palm trees, Jenny Holzer quotes and a lonely BMW E30 riding through Utah. 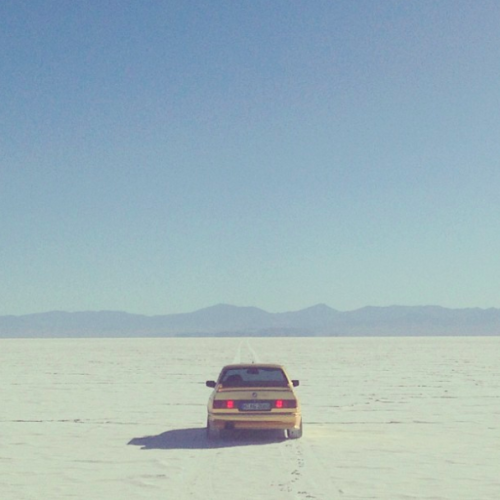 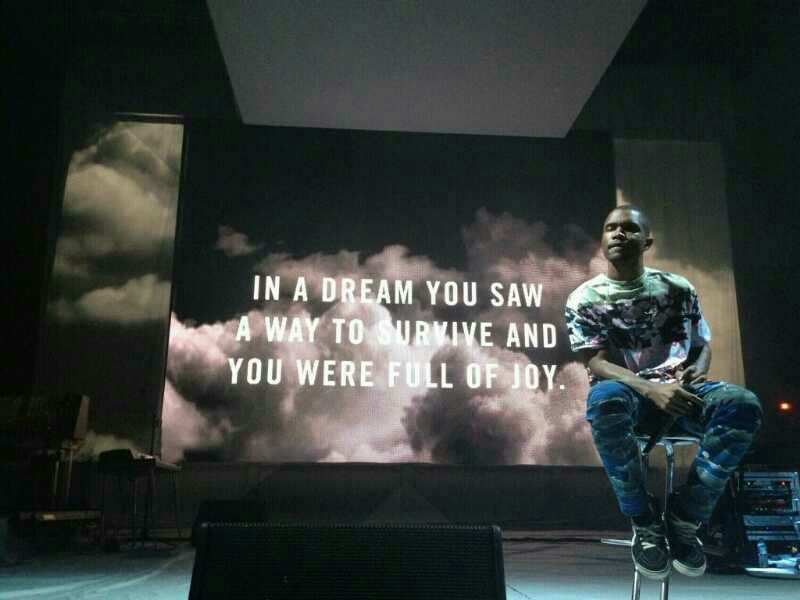 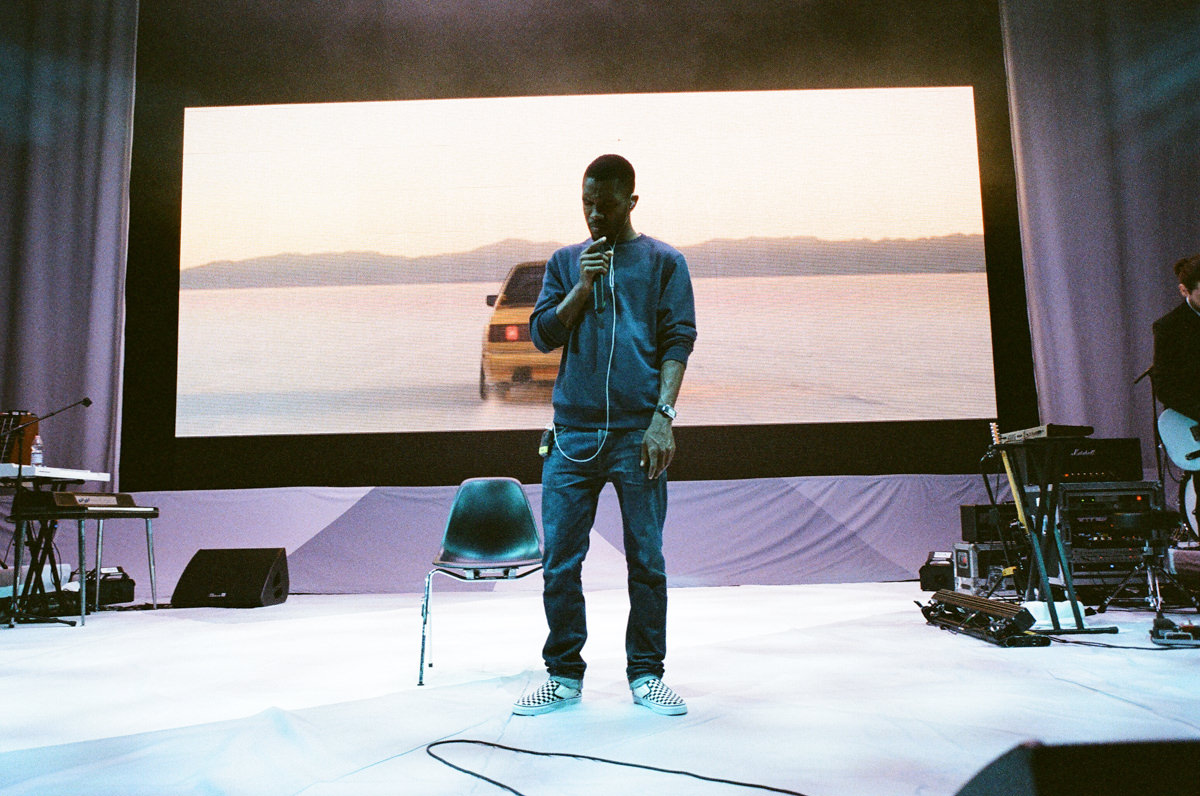 As he walked off the stage of Pemberton in 2014, the promising and flourishing rise of his career flushed with it. Unbeknownst to the world, he was now commencing his now-notorious hiatus. An unconventional absence for an artist at the height of their fame propelled Frank into another stratosphere. The reclusivness resulted in a fervid curiosity from fans and peers alike and generated a cult-like following for the musician within the community.
Following the Grammys, Frank moved to London which provided him with a form of nourishment from the previously culture obsessed world of Hollywood. He was now pensivly working with Wendi Morris, Thomas Mastorakas, Hans Ulrich Obrist and Zak Group going deep into the world of art and formulating ideas for his magazines and artwork.
In London, he enjoyed visiting record stores. He gained inspiration by studying the works of Cosey Fanni Tutti, David Greene of Archigram and visiting local theatres and watching movies. 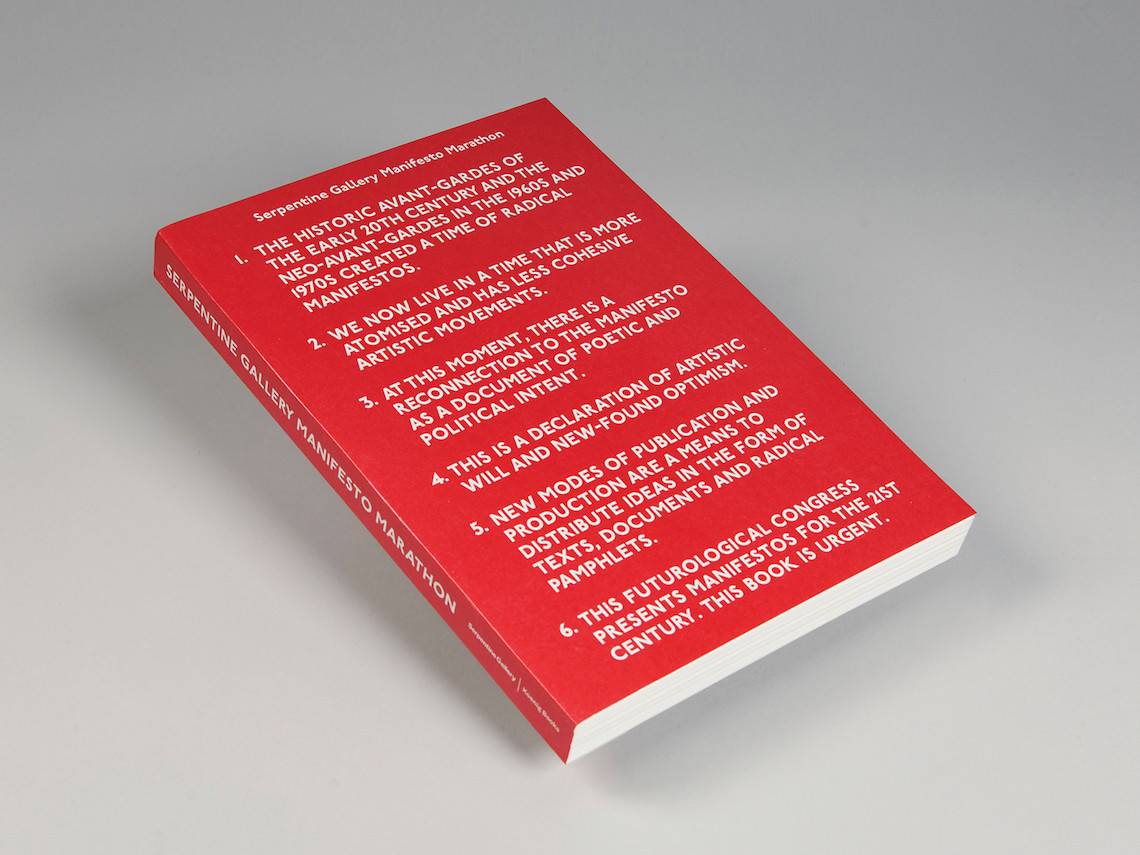 One of the books Frank read was “Serpentine Gallery Manifesto Marathon” which explores artists from the world of literature, design, science, philosophy, music and film. It features Marina Abramović (one of the people who convinced Frank to deactivate his Twitter) and Vivienne Westwood amongst others. 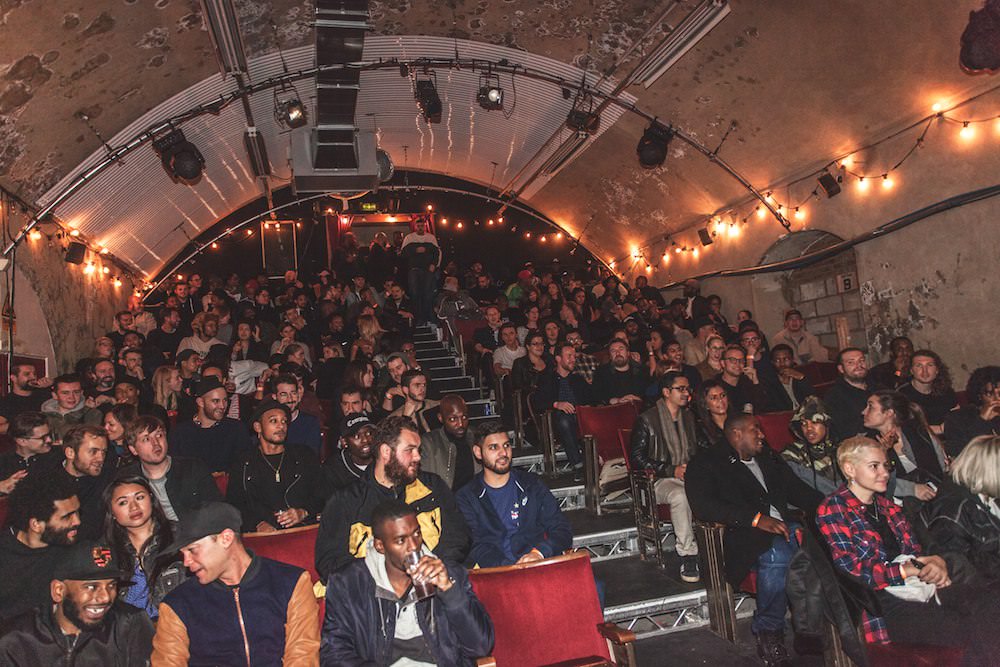 As both of the albums and magazine were now completed, Frank’s team turned their attention to the artistic side, taking in how the projects were to be presented and creating early drafts of the stage setup and performance lighting.

The blueprint for Frank’s return was slowly being crafted and well underway. Swiss graphic designer Michel Egger was hired to create the artwork for ‘Endless’ 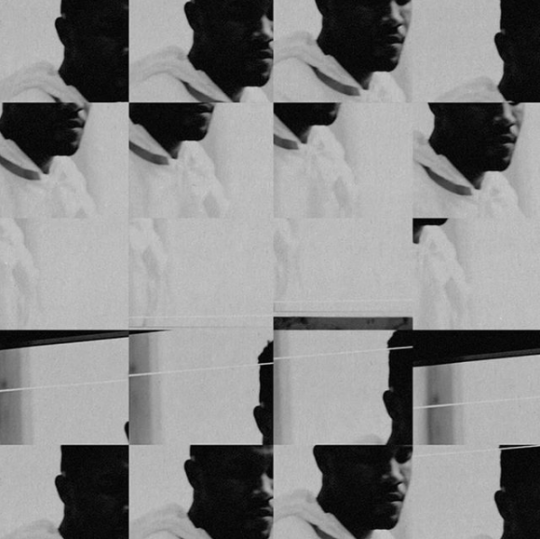 Kia Tasbihgou, a London based graphic designer was hired to design the artwork for some of Blonde’s tracks: Each of these works by Kia have been labelled from “S1″ to “S6″ which may have been the original idea for the rollout. “Nikes” did happen to be the first singe for the project but following that, both Frank and his team went radio-silence regarding any further singles, videos or promotions. The only other promoting tactics that have been displayed are the use of the tracks on “blonded RADIO” and “blonded Los Santos”. 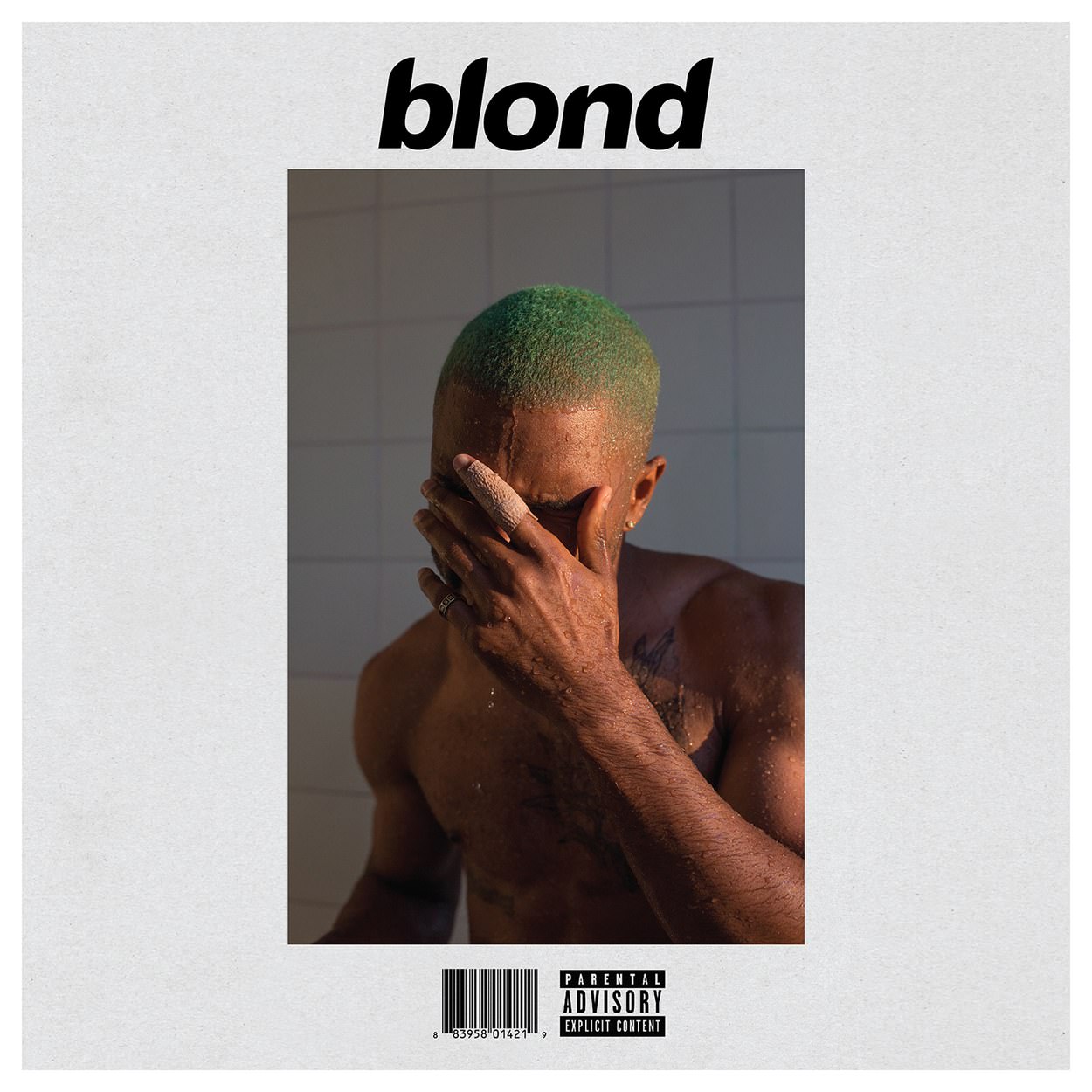 The main artwork for Blonde was shot in the early mornings of January 2016 in Wolfgang Tillmans studio. Frank drove from London to Berlin through the night to meet with Wolfgang to complete the shoot. He had to once cancel it because the hair stylist couldn’t complete the job on time.

With Blonde and Endless released, the focus was all on the stage set up and for that, Frank’s team hired veteran designer Willo Peron. The challenge was to have fans connect and feel intimate with Frank as if they were watching him craft the music in the studio. Everything from the lighting to the cameras chosen by Spike Jonze was taken into cosideration. Unlike Frank’s past performances, the overall grandoise of the stage was paramount to ensure the right feel was experienced. 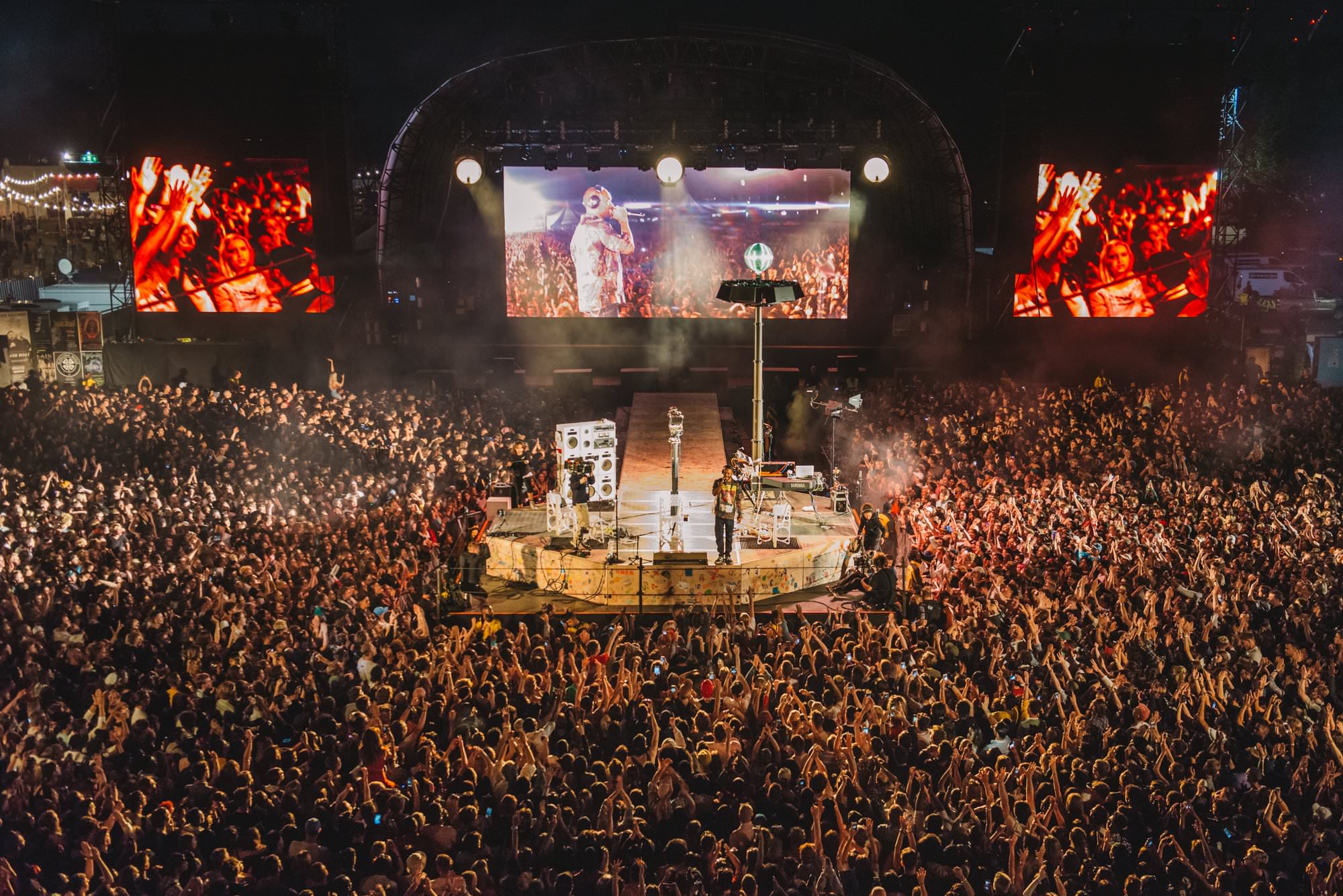 For the stunning movie tier quality visuals displayed onto the screens, Spike Jonze pulled out an array of cameras, from vintage camcorder-style visuals to professional movie looks. Spike wanted to create an evolution of picture, 4 cameras with 4 different looks.

They ranged from a black and white security camera with infrared illumination, a Sony VX-1000, popular for skate videos in the 90’s – and an Ikonoskop, a digital video camera which produces a specific, thick colour picture. The last camera was an “Alexa Mini” with an anamorphic lens, which provided large depth and the cinematic look. 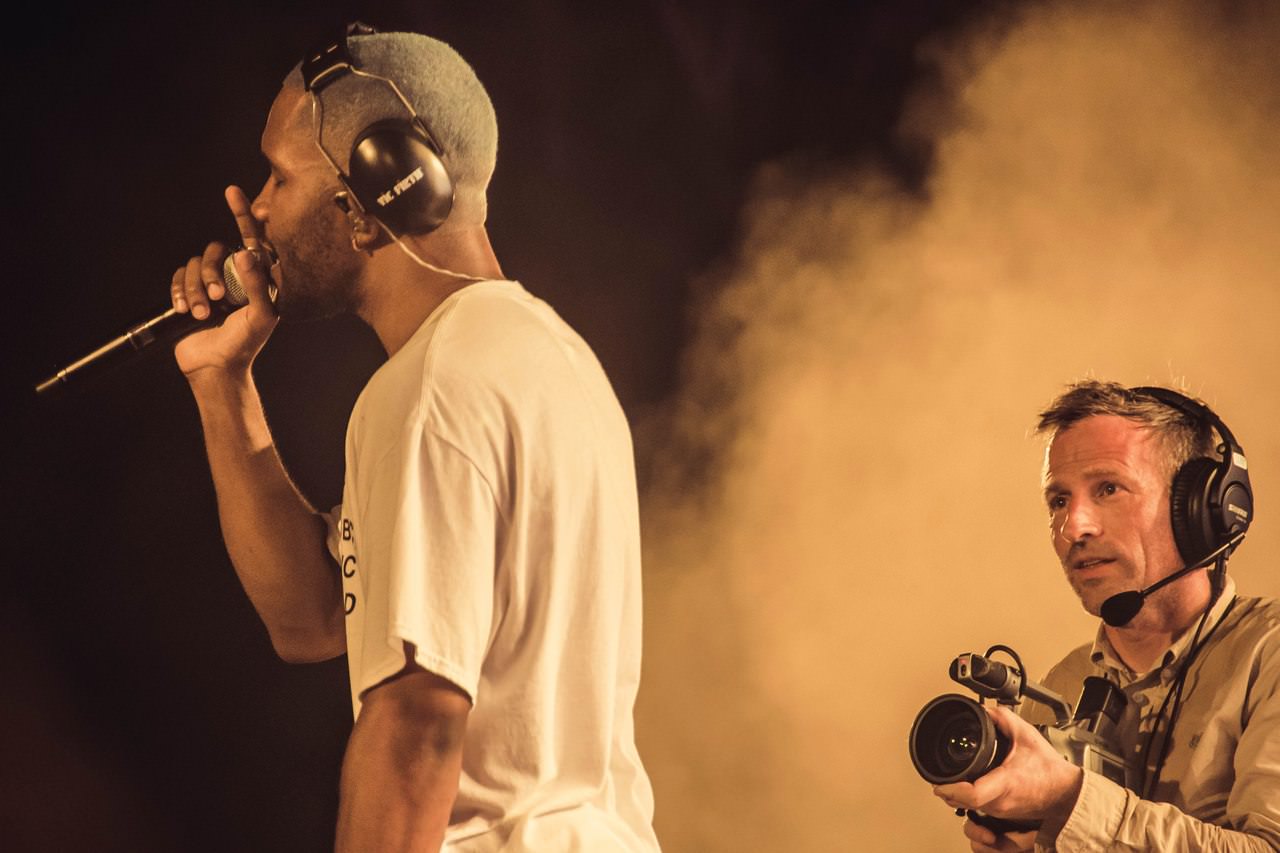 Frank’s team had full control over what cameras were being projected at what time. Here, Spike transitions from shooting the Alexia Mini to another Blonded crew member who’s carrying the Ikonoskop. The transitions were done seamlessly. Spike and Frank agreed that all footage shot would be in real time therefore no pre-recorded visuals were ever used. If they needed a blue background, Spike would place a blue paper beforehand and zoom in.

While visiting Tom Sachs studio in New York City, Frank liked the chairs Tom was building at the time and had him make some for the upcoming tour. 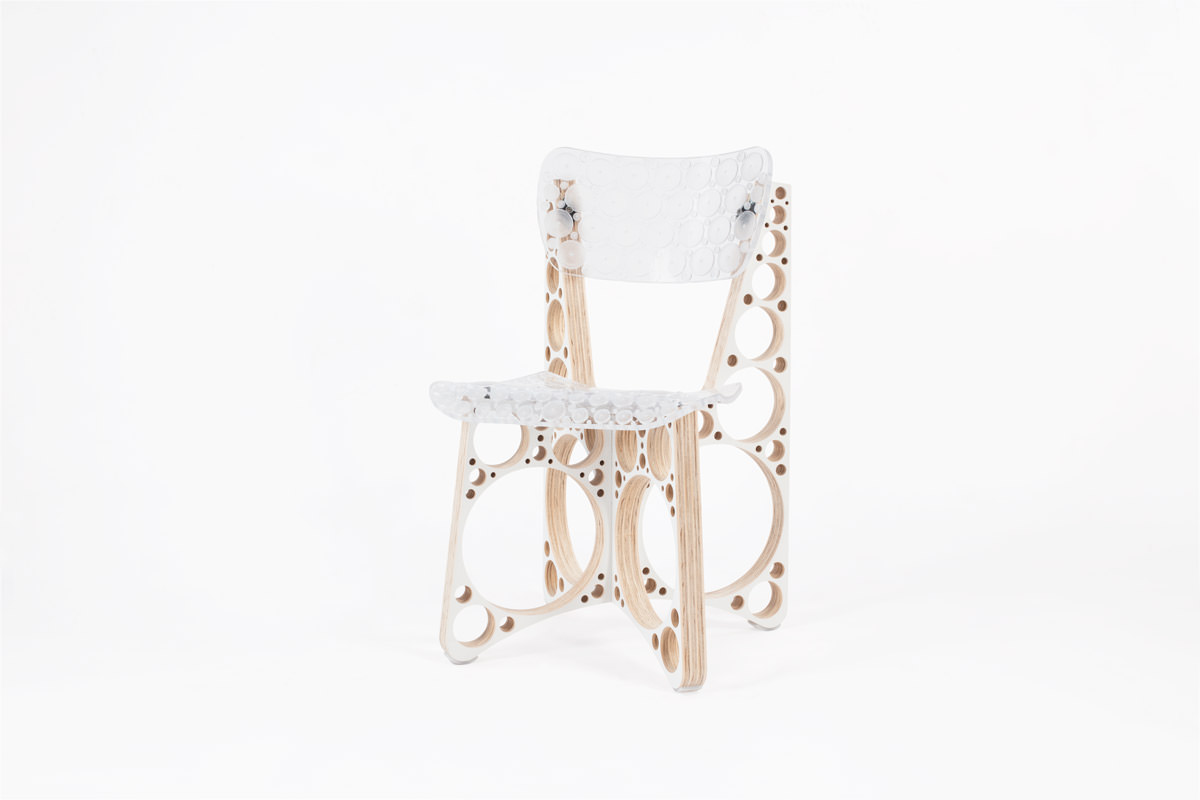 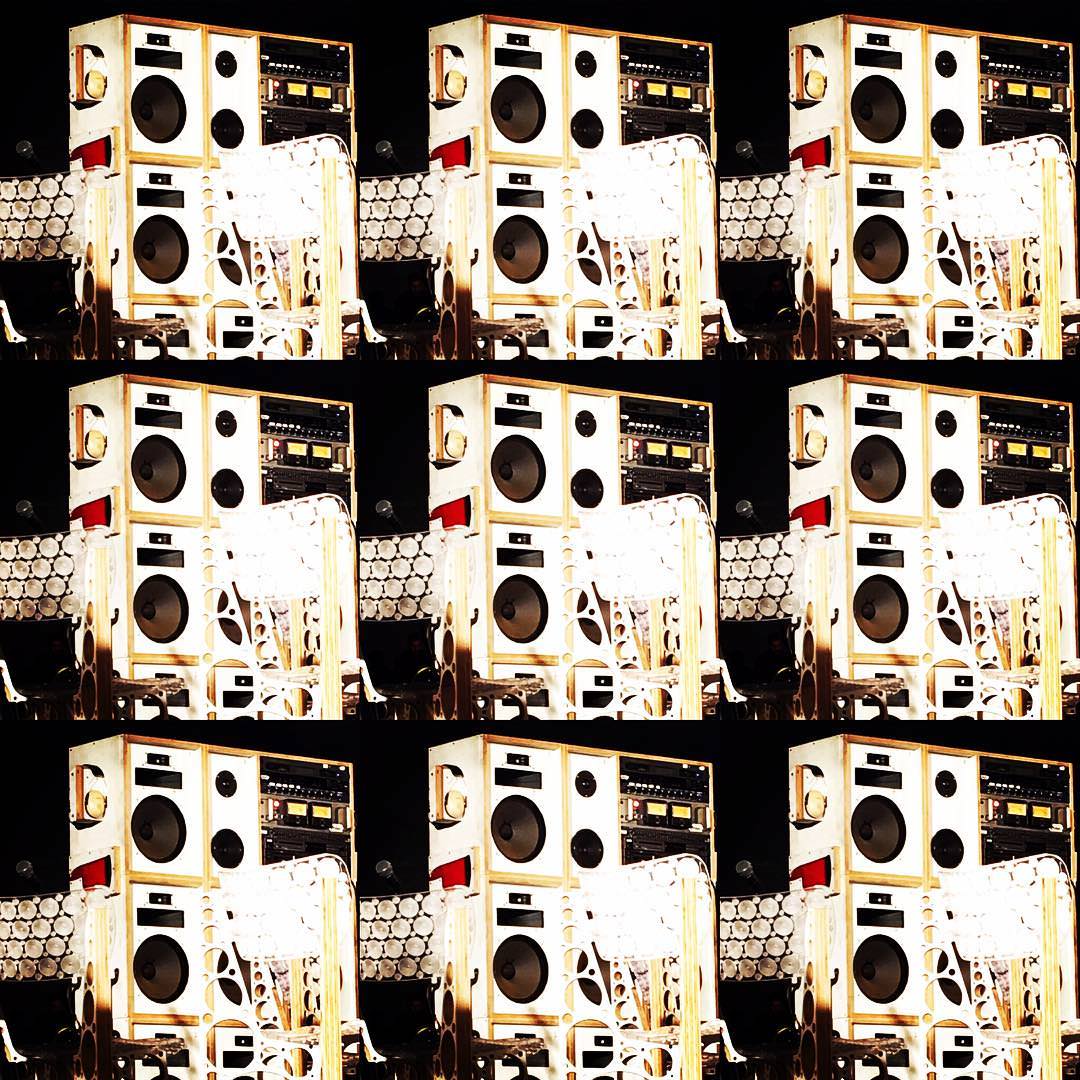 The last element of the stage was a customized runway made just for Frank’s performances. The stage would be constructed as the regular scheduled festivals carried on and would be completed an hour before Frank’s slotted time. It featured graphics designs, doodles and drawings from Frank’s friends, collaborators and tour staff. The designs provided a glimpse at Frank’s subconcious with nods at fashion, brands, manufactures and personal quotes. 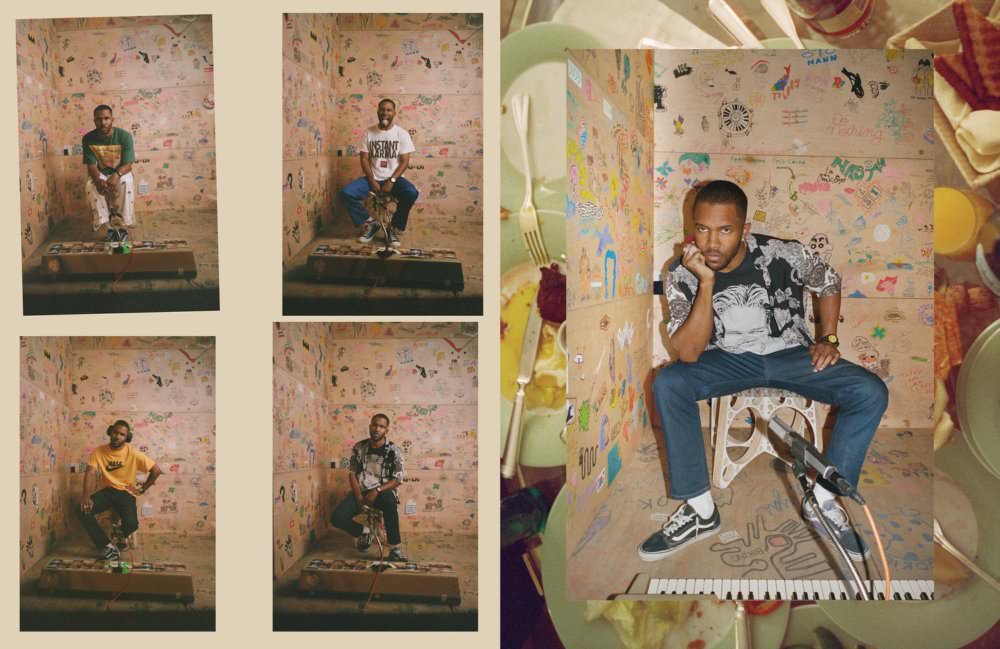 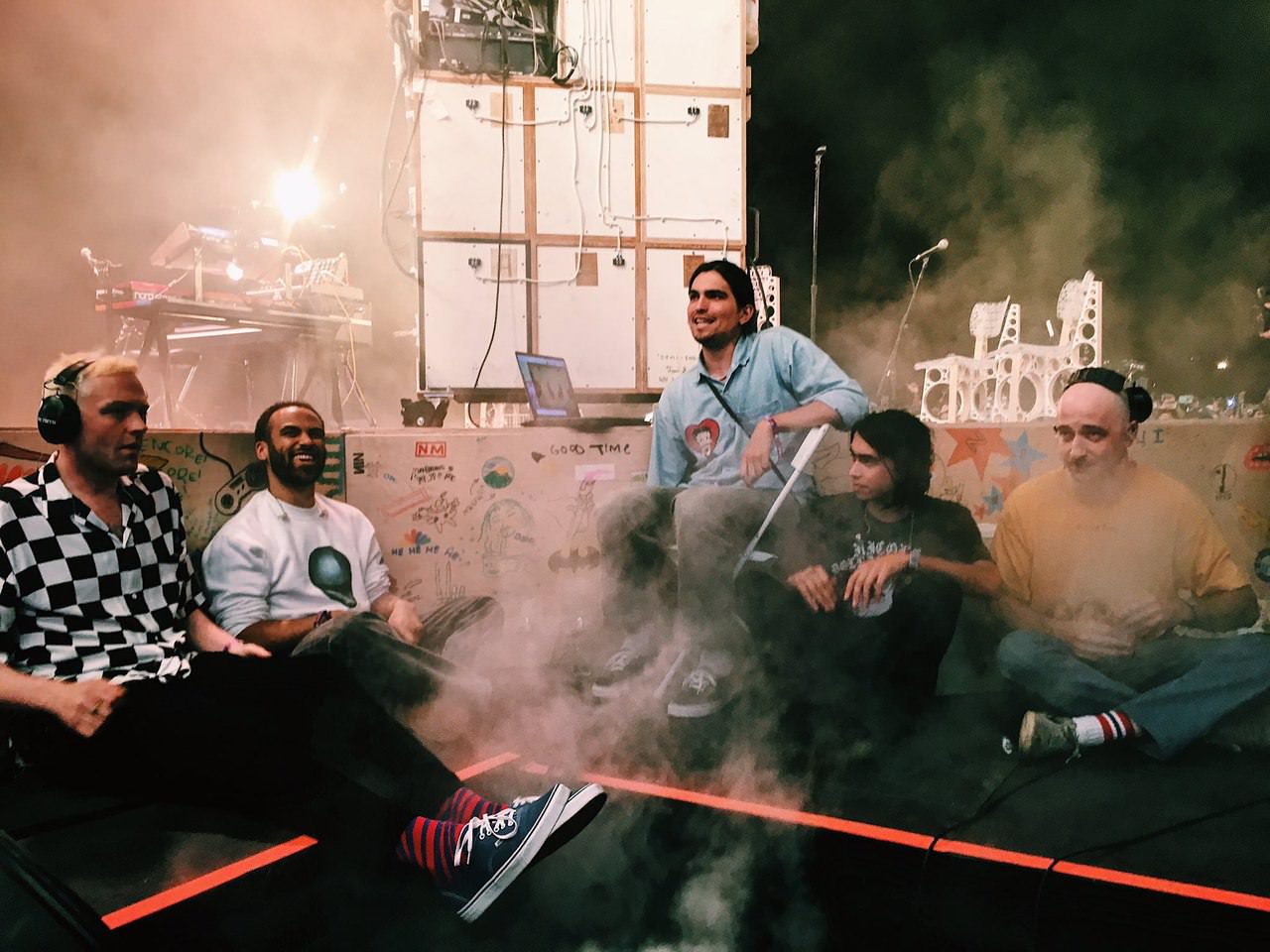 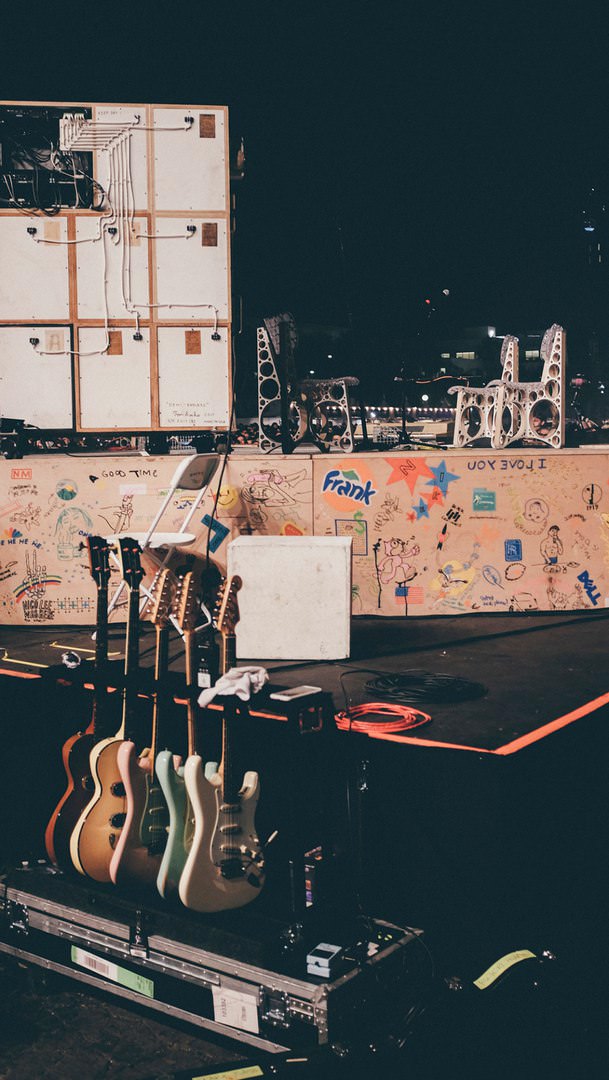 Frank Ocean redrew the entire blueprint for the next chapter of his career once he left the stage of Pemberton. He constructed a team of select individuals to ensure his creative vision was to be executed meticulously upon his return. Frank channelled inspiration from various forms of art and returned with an experience that’s as personal and raw as one could get standing beside thousands of fans. The Blonded shows were performed the only way Blonde could’ve been showcased, with a unique warmth of freshness.

Inside The World’s Toughest Prisons Season 6: Everything You Need To Know